I have kept the component references as close as possible to ones used in the original schematics.

I have kept (whenever possible) the same type of resistors as in the original: of carbon composition. But the rating has been chosen to be at least 0.5 W for carbon composition resistors because these are a little bigger than the 0.25 W ones, and more similar to the 1960 and earlier 0.25 W ones. In this way, even if there are a little too large for the power they need to dissipate, they will support a higher working voltage as the 0.25 W ones.

In case I couldn’t find a 0.5 W carbon composition resistor for a defined value, I could use a carbon film 1 W resistor instead.

The carbon composition resistors used are from the following manufacturers:

The carbon film resistors used are from the following manufacturers:

The wire wound resistors used are from the following manufacturers:

The 24-mm potentiometer is made by Alpha. 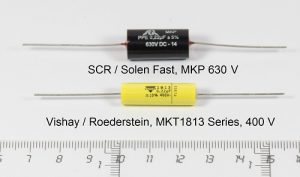 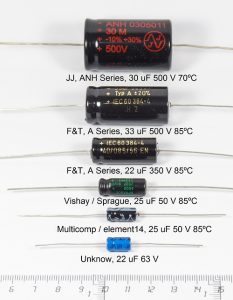 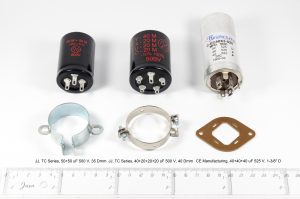 The original pointer knob still exists today (Bulgin, KX0370), but I have preferred to use another model, chosen among those appearing in the following picture.

I have tried them all to see the look of the prototype with the different knobs: